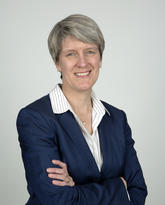 Department of Chemical and Petroleum Engineering

Dr. Hill is always looking for bright and motivated people to join her research group. Even if no specific positions are advertised, you can send your CV and a brief statement of interest to: jhill@ucalgary.ca.

Dr. Hill’s research is in the area of catalysis with applications to fuel cells, hydrotreating, gasification, and the conversion of solid waste materials, such as petroleum coke and biomass, into catalyst supports and activated carbon, which can be used to clean up gas and liquid exhaust streams. The spent activated carbon can then be gasified to produce gaseous products, including hydrogen that can be used for hydrotreating and in fuel cells.

The Hill group is developing sulphur-resistant catalysts to break aromatic rings and effectively upgrade heavy oil. The use of catalysts in heavy oil upgrading significantly improves the hydrogenation process through energy savings, selective product yields, faster reactions and removal of contaminants. Work is on-going to develop catalysts from the by-product petroleum coke.

Activated carbon can be economically produced from waste biomass. Research is on-going to understand the microstructure and surface properties of activated carbon to maximize the adsorption capacity for removal of organic and inorganic pollutants in tailings ponds.

Using a catalyst reduces the severity of the gasification process but the catalysts must be economic. The Hill group has found that naturally occurring sources of catalysts (e.g., switchgrass) improve the gasification of coal and petcoke and the overall sustainability of the process.

Carbon accumulation, from the use hydrocarbon fuels, decreases the efficiency and lifetime of SOFC anodes. The Hill group has developed a novel method of applying anti-coking compounds to SOFCs, while preserving the mechanical integrity of the anodes. This methodology promises to significantly improve the performance and service-life of fuel cell anodes.

Dr. Hill currently serves as the Canada Research Chair in Hydrogen and Catalysis in the Department of Chemical and Petroleum Engineering. In 2014, Dr. Hill was among the first group of 91 scholars to join the College of New Scholars, Artists and Scientists, an organization launched by the Royal Society of Canada. As well several technical awards, she has also received accolades for her mentoring work including the Engineers Canada Award for the Support of Women in the Engineering Profession.