When Dr. Tanvir Turin Chowdhury, PhD, first tried to connect with new Canadians in Calgary, he took a number of different approaches, but realized the answer is simple — just be with them.

The Oct. 18 event at Ramada Plaza welcomed presentations from academics, immigrant service-provider organizations, and grassroots community groups focused on work with newcomers. It also included a roundtable discussion about working together to meet the needs of all involved.

There are a number of ways for researchers to do outreach, says Chowdhury (pictured above), but in his experience, developing a relationship with community members is the best way to create meaningful engagement.

That might mean playing cricket with people, or organizing youth events to create mini health-and-wellness champions, but at its root, Chowdhury says, it means forming a partnership with community members, limiting the one-way flow of information, and creating resources adapted to the community.

It also means working with community-based service providers who have the same goals.

“We researchers have a tendency of working in silos, as well as taking a parachute-in and -out approach, so break that silo and reach out to that community organization who also has the same motive of serving,” Chowdhury says.

Attendees at the Mobilizing Knowledge on Newcomers Symposium in Calgary.

Funding from the Social Sciences and Humanities Research Council of Canada (SSHRC) supported the symposium. Chowdhury partnered with Dr. Mary Grantham O'Brien, PhD, from the School of Languages, Linguistics, Literatures and Cultures at UCalgary, and other members of the Newcomer Research Network to create the symposium.

“There was a repeated saying that we don’t know of each other's work,” Chowdhury says — which has inspired the beginning phases of a new project — an innovation lab, with the end goal of increased meaningful community-centred knowledge mobilization.

“We need to have a sort of real-time gateway, continual dashboard, or interactive knowledge map, where we know what’s going on, so we don’t repeat things and we can piggyback on others to improve what’s already being done.”

“This innovation lab can support community-based knowledge creation and make sure that knowledge uptake is comprehensive across all levels of community and stakeholders.”

Deidre Lake, executive director at the Alberta International Medical Graduates Association, presented at the event, and agreed with that sentiment. Lake has previously worked with Chowdhury and his team to look at the success rates of international medical graduates in Alberta, and their experiences in the Canadian job market through alternative career pathways.

“I think that one of the things that had come out during the roundtable was how do we keep this going?”

“There is duplication of work in some areas — including within university. There are multiple departments looking at similar topics — therefore, it would be great to have something in place where we can better co-ordinate our efforts and more effectively collaborate between the academic world and community,” Lake said.

Chowdhury is a founding member of the Newcomer Research Network at UCalgary, which reaches out to community organizations that work with newcomers to conduct research that’s meaningful to them. The symposium was an event where the groups came together to share and find a step forward.

“Alberta non-profits are much more active and much more proactive when they’re serving immigrant and refugee clients,” Chowdhury says.

A presentation at the Mobilizing Knowledge on Newcomers Symposium in Calgary. 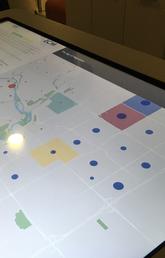 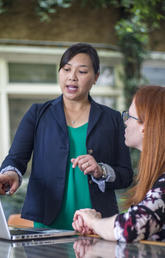