Members of UCalgary family among 20 Compelling Calgarians of 2019

A medical researcher, a PhD student, an Indigenous advocate, and a longtime community booster with connections to UCalgary were honoured as Compelling Calgarians in the Calgary Herald's 2019 list. Each year, the Calgary daily newspaper highlights 20 people whose significant achievements may not have had high profile in the community.

Medical researcher and assistant prof Katrina Milaney, PhD'14, shown above, is one of them. Her research contributed to the creation of the supervised drug-consumption site at the Sheldon M. Chumir Centre.

Deanna Burgart recently joined UCalgary’s Schulich School of Engineering, where she will integrate Indigenous knowledge and perspective into engineering education. She has spent her career guiding others and developing curriculum.

Many people know longtime university supporter Marg Southern’s contribution to Alberta tourism through her creation of Spruce Meadows with her late husband, Ron Southern. Without fanfare, Southern, Hon. LLD'90, spent her summer vacation in 2019 sharing her love of Alberta with other Canadians.

Alumni Vincent Ho, MFA'98, and Graham Mackenzie, BEd'09, were both named to the list. Ho is artistic director of Land’s End Ensemble and musical adviser for the Calgary Philharmonic Orchestra. Mackenzie is founder of the non-profit Major Minor Music Project, which helps youth thrive through music. 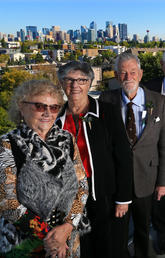