It was one thing to come across a 6,000-year-old copper spear point as a youth volunteer on an archaeological dig. However, what really moved Kelsey Pennanen was seeing how the discovery affected the Indigenous student who found the artifact left by people who may very well be his ancestors.

Years after that eye-opening experience set her on a graduate school journey into Canada’s past, Pennanen is now a recipient of a prestigious Trudeau Scholarship for her PhD research at the University of Calgary.

As an undergraduate, Pennanen moved from an early interest in history to archaeology through the geo-archaeology program at Lakehead University. She spent her summers volunteering with a Youth Ranger program that involved Indigenous youth in hands-on archaeological work in northwestern Ontario.

It was during one of those field experiences that the copper spear point was found. “The son of a Chief of one of the local First Nations found the spear point,” says Pennanen. “It gave us a chance to learn about hunters of the past, and how those hunters may have been his ancestors. Seeing him make that connection between the ancient past and his own experience learning to hunt today was incredibly powerful.”

It was a formative experience for Pennanen, whose love of Canada’s wilds also stems from being the daughter of a trapper. The prospect of exploring Canada’s past in a hands-on way outside of the classroom became a driving force of her graduate pursuits.

As a doctoral candidate and Trudeau Scholar, Pennanen is working with the Kwanlin-Dün and Carcross/Tagish First Nations as well as the Yukon government to document sites in innovative ways using digital technology.

“Large ice patches in the Yukon are now thawing due to climate change,” explains Pennanen. “As the ice disappears, cryogenically frozen artifacts are surfacing. This includes decorated dart shafts, moccasins and other evidence of caribou hunting at high altitude alpine sites that have been recovered from the ice.”

What truly sets Pennanen’s research apart is its multifaceted approach to documenting the archaeological record. She hopes one of the outcomes will be a digitized resource that can help preserve and pass on knowledge of the area by Indigenous Peoples for future generations.

“We’re looking at how to create a ‘stacked knowledge database’ that will serve as a richly layered resource combining archaeological research using photogrammetry and other methods with Indigenous storytelling, ethnographic and ecological information, noted hunting drive lanes, and more into a single online resource that can be used for preservation and educational purposes,” says Pennanen.

The approach marks a departure from archaeology’s colonial past by focusing on collaborative outcomes that can help pass on some of the knowledge and traditions of First Nations communities.

Pennanen in the field on Northern Baffin Island in 2018.

Pennanen is UCalgary's first Trudeau Scholar in 15 years. She is also the recipient of a SSHRC Canada Graduate Scholarship (doctoral), an Izaak Walton Killam Memorial Scholarship, and an Eyes High Doctoral Recruitment Scholarship.

The Trudeau Scholarship is valued at $40,000 annually for three years and includes an additional annual budget of $20,000 for research activities including travel to conferences, courses, and fieldwork. In a typical year, the Trudeau Foundation provides travel and training opportunities that bring together all of Canada’s Trudeau Scholars to share ideas and learn collaboratively through intensive courses and conferences.

“The Trudeau Scholarship is highly competitive, limited in number and very prestigious,” says Dr. Donna-Marie McCafferty, associate dean (scholarships) in the Faculty of Graduate Studies. “The fact that one of our students was recognized with this honour speaks to the profound value that her research brings to the lives of Canadians.”

2020 has been anything but typical, leading to cancellations of the usual travel plans for Scholars. For Pennanen, that means missing out on a trip to Helsinki, Finland. While initially disappointed by the cancelled trip, she now sees it as a new opportunity to work with Indigenous Elders as she explores the archaeological and cultural heritage of their ancestral homeland in Northern Canada.

“Thankfully, the Trudeau Foundation allows unused travel and research allowances to carry forward to future years,” says Pennanen. “Helicopter ice patch surveys are still being flown, with proper COVID measures and protocol in place. The planned field dates are Aug. 10 to 23. I am hoping to travel up to Yukon two weeks prior and will self-isolate at a cabin prior to participating in the surveys and collecting data for the field season next year.”

Pennanen also hopes to use some of her travel funding for more helicopter hours to fly some Elders to the study site. “They have a rich knowledge of the traditional hunting grounds in the area, and can provide unparalleled insight and oral history that can help understand traditions that may reach back thousands of years, connecting with the ancient peoples of the area.” 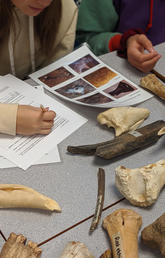 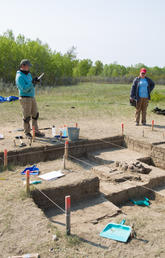 In the News: Peter Dawson, Anthropology and Archaeology, in CBC News