The Schulich School of Engineering announced the newly named Alka and Sanjeev Khanna Engineering Career Centre on Tuesday, Sept 30 at a recognition event for the family. As part of the Engineering Leaders campaign, the Khannas have made a generous $1-million donation.

“This donation brings us full circle,” said Sanjeev Khanna, MSc’90. “For me, the University of Calgary is where it started. At the school, I received valuable mentorship and networking opportunities. That support and encouragement helped me succeed.”

After graduating with a masters in mechanical engineering, Sanjeev Khanna worked for years as an engineer in Alberta and Ontario before venturing into entrepreneurship. Now based in Dallas, Texas, Alka and Sanjeev Khanna own several businesses, including 100 Subway franchises.

The Khannas see education as a priority and want to help others succeed. Their gift will benefit students in their academic pursuits and professional development. The donation will be split to allow $500,000 to be put towards renovations of the Engineering Career Centre and surrounding spaces. The other $500,000 will be endowed to support one undergraduate award, one graduate award, and special guest lectures on engineering and management. The first awards are expected to be distributed in 2016-17.

The Engineering Career Centre is a strength within the Schulich School of Engineering offering students a hands-on and solution-oriented approach to learning. The Engineering Internship Program facilitates experience outside the classroom, international opportunities, and strong industry connections. 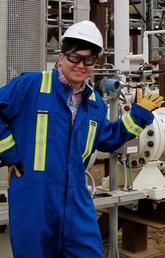