Reid Hintz surrounded by family and the Schulich team. Submitted

Reid Hintz is just like any other seven-year-old boy.

Full of energy and dreams to tackle the world, he basks in what feels like a rare glimpse of early morning sunshine as he and his family head outside the Alberta Children’s Hospital (ACH) to meet with a television news crew.

Reid was born with Arthrogryposis Multiplex Congentia (AMC), a condition that causes stiffness and limits the range of motion in all four of his limbs. He has had nine surgeries and spent over 20 weeks in a cast to help correct his ever-changing body.

His family was connected with a team of students from the University of Calgary’s Schulich School of Engineering two years ago in hopes of making an even bigger change to his life.

In March 2019, the team met with the Hintz family as well as their ACH team and the Tetra Society of Calgary, sitting behind a two-way mirror to learn more about Reid and his condition.

“After our appointment, the guys sat in the hallway and we discussed Reid’s daily hurdles and what we want for his future,” says Reid’s mother, Rebecca. “They were so sweet, they even took the time to talk to Reid about his favourite things to do.”

The initial interaction led to a lengthy chain of emails and text messages. With feedback from the family, their ACH team and the Tetra Society of Calgary, the team started work on an assistive-living exoskeleton.

“It didn’t take long to realize how special of a family Reid has, and how unique he truly is,” Perewernycky says. “Along with the enthusiasm and encouragement of all of our partners, it became our privilege to work on this for our capstone project.”

The family didn’t think twice about making the trek back to Calgary from their home in Medicine Hat at any time to help, while the team also made trips to the family’s home to work in their garage.

A rendering of the assistive living exoskeleton.

The exoskeleton fixes myoelectric sensors to Reid’s muscles, and when those sensors read impulses in his muscle, he can perform the bending at the elbow.

Using the device, Reid was able to eat a piece of watermelon — with utensils — for the very first time.

“We’d never seen his arms lift higher than the width of his body,” Rebecca told Global News. “I had never seen Reid stack blocks vertically because he always had to be on his side. It’s something that every parent takes for granted — those milestones we never had.”

Watching Reid become more mobile has also been gratifying for the Schulich team.

“Working on this project has opened our eyes to the lives of the families with children who have disabilities,” Perewernycky says. “From Rebecca’s own experiences to other stories she shared with us, it became apparent how hard these families work to provide the best for their children.”

He says the family has become an inspiration for them to do more, and he’s hoping they can make the device more portable so the family can take it home.

Dreams for the future

In the future, the team would also love to see the exoskeleton become more accessible for any family who needs it.

“So far, we’ve been paying for this project out of our own pockets,” Perewernycky says, adding they received some help from Action 3D Printing. “With additional funding, we would be able to finance a system to help Reid learn to use his muscles and therefore gain better control of his device.”

He says better control would offer a more natural development for Reid’s motor-neuron cortex and expand the usability of the device for his development.

The Hintz family is thankful for the help they have received, and will do everything they can to support the team.

“Using the exoskeleton, Reid will live a more independent life and be involved more with his peers and family in normal daily living,” Rebecca says. “At school, he could independently do things like math and art, while he could play cards and board games at home with his family.”

She adds she will be a “little sad” when the project is finally complete as the team won’t be as close anymore.

“I don’t know if I can truly express in words what this project and the team means to us,” Rebecca says. “They have become part of our family. They are passionate and very loving towards Reid, and have constantly gone above and beyond for us.” 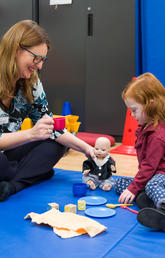 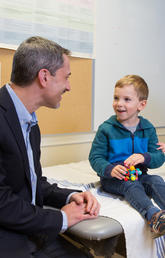